Cody and Breanna’s love story is one for the books! Here is their love story, told by Breanna.

“Growing up Cody and I were both in similar youth groups (just 6 hours apart) but our youth groups went to the same summer bible camp. Oddly enough we never met each other at camp. But I always made new friends at camp and some of those friends were from the same church as Cody.

Now, to some our love story may sound silly, but to us it’s a work of God. Only through Him could this all happen. We could have never planned this out ourselves! Okay back to the story, so in January of 2015 Cody came across a picture on Instagram that I had commented on from someone who went to his church, so he clicked on me and then decided to follow me. After a couple hours he decided to send me a direct message just filling me in on who he was and how he found me, letting me know he wasn’t a stalker or anything. Me, thinking to myself, yeah, ok sure you’re not, but I decided to message him back and then after that a few conversations started. After a couple months of talking and getting to know each other a little, I got to thinking to myself, “there is no way I’d move all the way to Tennessee, so why keep this up?” So that year the talking kinda just stopped. But in January of 2016 something just kinda told me I needed to text Cody and just say hey and see how he was doing. So I did. From there, we talked all day everyday, soon we were talking on the phone, Face timing, filling our families in on how things were going between us, and by May, Cody was making a trip to Missouri to meet my family and me. To be completely honest we were practically in love before we even met each other in person. Kinda one of those situations where you just KNOW he’s the ONE!

Around the middle of May, Cody asked me to be his girlfriend and of course, with blushed cheeks, I said YES! Now I have to say, dating long distance was never my ideal situation, but somehow we made it work and managed to see each other a lot all summer long. Cody and I had so many long talks, about all the important things, and were shocked how much we completely agreed on! After much prayer, and advice, we knew we were meant to be! I definitely had never been so sure and confident and had such peace about anything in my entire life. We both truly believe this is exactly what God has for us. Each other.

NOW on to my favorite part, the proposal! Cody had been attending Middle Tennessee State University for the past three years, and August 6th 2016 was his big day, Graduation day! His family and friends and of course me, were so excited and proud of him! So his family was planning a big surprise party that afternoon for Cody. I was so excited to be in on the big plan. His mom and sister were getting their nails done and everything for this big bash, so of course I had to get mine done too! After doing my very best not to say anything to Cody about this big surprise, the big day finally came, I wouldn’t have to lie and hold the surprise in anymore! We all went to graduation and he got his diploma, and now it was go time! Onto the big surprise for Cody (so I thought) Cody and I left from graduation to go by the house so Cody and I could get freshened up to meet his family for dinner (AKA the party!) after getting into down town Nashville we got parked and then I was told to take Cody to the big Pedestrian bridge to stall. We were walking along the bridge and then we stopped when we got to our favorite spot on the bridge where you could see the city just perfectly. After standing and admiring the view for a minute, Cody reaches over and grabs my hands, and says to me “babe, there is no surprise party” and I immediately burst into tears, cause then I just knew! He got down on one knee, and to be honest I was so excited, happy and nervous I don’t remember what he even said other than, will you marry me?! And I said YES! After lots of crying and hugs and kisses and so much joy! I look over and there is a photographer taking our pictures, which made me even more excited! It’s every girls dream to have a hidden photographer, am I right?! Needless to say, he got me big time and I had no idea whatsoever! It was perfect. Now we are anxiously awaiting May 13th, 2017 so we can say “I DO!” And start our forever together!” 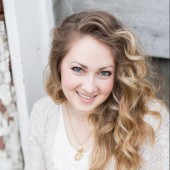 All stories by: Alyssa